First of all, you need to make this recipe ASAP, because if there’s any combo that needs recognition during quarantine season, it’s chocolate and banana. Secondly, it’s a tasty AND healthy breakfast that you can enjoy all week long.

The trick is to use super ripe bananas as they get sweeter as they ripen, which makes the bread even sweeter! Start by mashing the bananas in a large bowl, add your eggs (if you’re using flax eggs, just mix 2 tbsp flax meal with 6 tbsp water) and then whisk until combined.

Next, melt the coconut oil and add to the wet ingredients with the maple syrup and vanilla. Whisk together.

* I have been asked before about why I swap other oils with coconut oil and while I still use avocado oil and olive oil in regular cooking, I do enjoy using coconut oil in all of my baking and here’s why. Many studies have tried to unveil the health benefits behind replacing other oils with coconut oil. And although there is no good evidence behind reducing cardiovascular disease risk, preventing and treating diabetes or reversing Alzheimer’s disease – there are some good studies that have shown greater satiety and higher energy expenditure in the metabolism of coconut oil.

Lastly, add the batters into your loaf pan and swirl them together with a butter knife. I added a sliced banana and some chocolate chips on top and this is truly the “cherry on top”. The banana almost caramelizes and makes it super sweet. I always leave it for the last bite 🙂

91% of you guys agreed that having a period sucks! So let’s talk about it!

When a women hears PMS, they typically think it’s the inevitable cramping, emotions, exhaustion and all the other horrible symptoms that come along with their period. PMS is premenstrual syndrome and comes about 1-2 weeks before your period. Symptoms that I’ve personally experienced include the whole array – from cramping and bloating to irritability and mood swings. *cue my family’s remarks. And actually about 85% of women have reported having at least one symptom. But did you know that what you eat may actually worsen or decrease the intensity of some of these symptoms?

So let’s talk about THAT!

What should you restrict during your period? Alcohol, caffeine, salt and sugar can actually make symptoms worse. And I know what you’re thinking – these are all things that we CRAVE when experiencing PMS. I swear I go from sweet to salty and back a hundred times during my period. And caffeine and alcohol are suppose to boost your energy and mood. But, all of these have been shown to increase cortisol (the stress hormone) and decrease serotonin (a chemical our body makes to regulate mood, social behavior, food cravings, sleep and memory). So restricting these during your period may actually decrease symptoms like fluid retention, cramping, bloating, anxiety and irritability.

What foods can you eat to reduce PMS? Eating a balanced, healthful diet is a start. But, there are also specific vitamins and minerals that studies have linked to PMS symptoms.

Calcium and Vitamin D: Studies have shown a relation between increased intakes of foods containing calcium and vitamin D and a decrease in PMS risk. Symptoms like fatigue, mood swings, headaches, irritability, anxiety and depression that you experience during your period are similar to symptoms you would experience during hypocalcemia (low calcium levels in the blood). Vitamin D is important in the absorption of calcium – so increasing your intake of foods like yogurt, milk, cheese and leafy greens before or during your period may give you the energy and mental boost you need.

B vitamins – like Vitamin B6: Foods such as pork, whole grains, fatty fish and eggs contain vitamin B6, which is a factor in the synthesis of tryptophan (the precursor to serotonin) which affects your mood in a positive way. Studies have shown a decrease in PMS symptoms such as moodiness, irritability, forgetfulness and bloating in women taking B6 supplementation daily.

Omega 3 fatty acids: Fatty fish and fish oil supplements have been studied for their effect on PMS symptoms. These contain dietary fats (DHA and EPA) which have a ton of health benefits including their role in anti inflammatory processes and the nervous system. Studies show that proper intakes of omega 3’s with DHA and EPA have shown to decrease symptoms like depression, anxiety, nervousness and lack of concentration during PMS. Other symptoms studies have found improvement in include bloating, headache and breast tenderness.

Iron: Not only are you losing iron during menstruation every month, but studies have actually shown that women with intakes of non-heme iron (found in plants) had a lower risk of PMS. Non-heme iron is found in leafy green vegetables like spinach, kale and broccoli. Heme-iron, which is found in animal sources (meat and eggs) helps replenish the iron lost through menstruation. And yes, earlier I said that sugar can cause increased symptoms, but dark chocolate is actually fairly low in sugar and packing in iron! So let yourself have the chocolate!

2. Allow yourself to eat a little more these days! Your body is burning 100-300 extra calories a day.

3. Continue to exercise. Whether it be a walk or HIIT – exercise increases your endorphins, which boosts your mood and decreases lethargy.

Next time Mother Nature decides to bless you with its presence, remember these tips and show it who’s boss!

You guys – I got SO many responses to my IG story the other day with the sneak peek of these vegetarian enchiladas. I just couldn’t wait to share the recipe with you all!

Surprisingly, I am not a huge Mexican food fan. I think it’s because growing up we never went out to eat and anytime we did, my dad would choose La Panchanga’s. If you’re from Jefferson County, you know the place. It was good, but you know that thing where if you eat a food too much you get averted to it? I think that’s what happened. Now I’m 25 and live on my own and anytime I want to go out to eat, my BF chooses Pancho’s. *insert rolling eye emoji.* I guess you really do end up with someone like your dad.

Don’t get me wrong- street tacos and a marg are definitely a top ten for me and when he offers to buy me a marg, he knows he got his way – hook, line and sinker. But enchiladas are always my go-to when at Pancho’s, so of course I had to make a healthier version at home.

The nice thing about this recipe is that you literally just mix everything into one bowl, add it to your tortillas, pour the enchilada sauce and sprinkle cheese on top and throw it in the oven for just 20 minutes! So without further ado- Vegetarian Enchilada recipe coming up!

It has been over a month now since we have eaten at an actual restaurant. And as much as I miss a perfectly cooked Atlantic salmon with a big old glass of wine, I’ve actually enjoyed cooking at home more.

Last Christmas I got an air fryer and boy it has been a GAME CHANGER. I’m a sucker for quick, easy meals and I love that I can throw chicken in for just 16 minutes and get a healthy, tasty meal.

One recipe I’ve been enjoying has been this coconut crusted chicken. With the addition of the sweet chili sauce, I just can’t get enough! If you’re looking for an easy recipe to make, I promise this one won’t disappoint!

2. Toss chicken in almond flour, then egg, then mixture of coconut and panko.

4. Place chicken in air fryer and cook for 8 minutes.

5. Flip chicken and cook for another 8 minutes.

6. While chicken is cooking, mix honey, siracha sauce and red chili flakes together in a saucepan.

Hey y’all! As match day inches closer, I reflect back on the stress and anxiety that comes with filling out DICAs and hoping for that match. With less than a 50% match rate, we all know the pressure. Take it from a girl who didn’t match the first time around! END_OF_DOCUMENT_TOKEN_TO_BE_REPLACED

Last week I gave you guys my five ways to practice self-care. My #5 favorite way was to try a new recipe. There are tons of recipes out there, but this one is a must-try this week! If you’ve stocked up on canned goods, this is one recipe that will utilize them. Already gluten-free, full of protein and fiber and easily transformed into a vegan dessert, if needed! END_OF_DOCUMENT_TOKEN_TO_BE_REPLACED

With everything going on with COVID-19 right now, along with my job in healthcare, I felt like it was important for me to practice social-distancing to prevent spreading it to the elderly population I work with everyday. Around 40% of you agreed in saying that you are also trying to skip the gym, but want to continue your workout regimen. END_OF_DOCUMENT_TOKEN_TO_BE_REPLACED

Many people, especially in the health-career field, have struggled with disordered eating. It comes in many different shapes and sizes. Some people struggle with anorexia, some with restrict-binge, some with just binge eating and many in between. In a world constantly judging a persons worth and placing them in certain “boxes” based on the way they look, it’s tough not to compare yourself and get pulled in to disordered eating.

As a dietitian, I myself have also struggled with disordered eating and although I have overcame many of these behaviors, I still have to give myself pep-talks to keep from reverting back. END_OF_DOCUMENT_TOKEN_TO_BE_REPLACED

Growing up, my mom always cooked. I remember going out to restaurants and literally making myself think I was sick, just because it wasn’t my mother’s cooking. And honestly, when I think back, it’s not even the home-cooked dinners that I remember the most. It’s the weekend breakfasts! Every weekend, we woke up to a home-made breakfast. Whether it be pancakes, waffles, eggs and biscuits ‘n gravy or muffins. We always knew that weekends were for lazy mornings and good breakfasts with the family. END_OF_DOCUMENT_TOKEN_TO_BE_REPLACED

I want to disclaim that this post is not what you may think. I am not saying to read this and then gain fifteen pounds to feel better. I am simply suggesting that creating a healthy relationship with food, moving your body only in ways that you enjoy and finding a love for your body- no matter the size – may result in a happier, healthier you! I want to point out unhealthy cycles that I once had to stay a certain size and weight that caused me to feel drained, stressed and uncomfortable. And I want to encourage anyone who is struggling with the same things to find a healthy place. END_OF_DOCUMENT_TOKEN_TO_BE_REPLACED 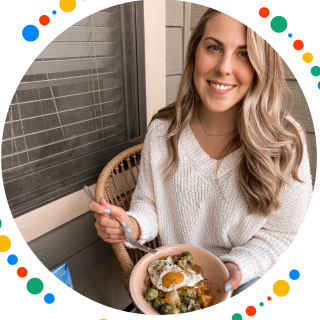 Hi Friends! I’m Caitlin Mudd – a Registered Dietitian with a love for nutrition and fitness who’s goal is to show people that being healthy doesn’t have to be expensive or depriving! We can still find enjoyment in food and working out. Thanks for stopping by and please take a look around.